Guardians of the Galaxy Review 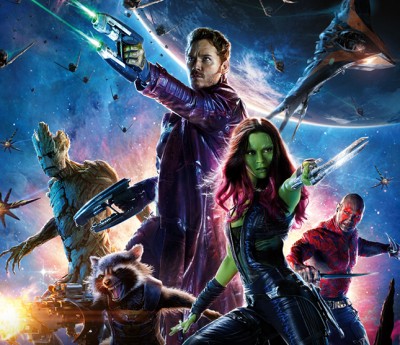 Guardians of the Galaxy Review

So I found myself in a preview of seventeen minutes of 3D footage from Guardians of the Galaxy. Why? Because as a girl and a geek I’m interested in these things. Thankfully there is a strong female character that is more Buffy than Kendra

Although There is a Kendra-like character in Drax and it’s gonna be AWESOME!

Now here is a man who loves his technology but we’ll get on to that later. Our 17 minutes in introduced by a vague definition by the character of his history deliberately intended to lead those who don’t know the story astray which is brilliant.

We join our intrepid heroes (for a loose definition of “heroes”) on their way to jail. On their way to jail we learn that this “team” (again, a rather loose definition of the word “team”) are only just gathering and an incident prior to their arrest meant that the orb in question (you’ll learn more about it but suffice to say the reason these criminals become heroes is because of this orb) is not yet secure in location.

In addition to this, the amazingly kick-ass female among their group apparently fouled the raccoon’s attempt to obtain the bounty on the human’s head. The human is Star-Lord, the woman is Gamora and the Raccoon is Rocket – a raccoon abducted from Earth and experimented on, turning him into a sentient, bipedal criminal. Star-Lord and Rocket are sent to jail with Gamora and Groot – who only says “I am Groot” the entire time and is an accomplice of Rocket, later helping with the escape from jail (I did say SPOILERS).

Gamora is a female assassin whose father is guilty of some serious crimes. People hate her because of her father but not only can she defend herself, she takes out most of the guards before possibly ripping the arm off a guard for a piece of tech to assist the escape (I saw no evidence of the dismemberment). Finally the literal Drax joins the band. His taking of everything literally is sure to provide significant laughs through the movie. No, not just surely – it did while I was there (“nothing goes over my head as I leap up and catch it”) and the other characters attitudes means it’s gonna be an ace movie.

In the background, quietly enhancing the movie but not getting all gimmicky is the 3D. Usually there’s something reaching out beyond the frame or poking out or something distracting. Thankfully there was nothing so gimmicky in the 17 minutes we saw. In this movie, the 3D is a strong supporting feature, enhancing the experience and drawing you into everything from being sprayed with orange goo to floating in a pod when the gravity is turned off – which is where the 17 minutes ended. The group had pretty much almost escaped and then we all moaned as we cut to longer commercials for the movie including Rocket showing he understands Groot and Star-Lord admitting he really only has 12% of a plan (which, as Groot points out, is better than only 11% of a plan).

All in all, the mere 17 minutes made me more excited than ever to see the full film and I hope you will too not for any commercial reason but because I think that as a girl and a geek you’d enjoy it! It was action-packed, the 17min was building a fantastic story, the special effects were worked into the movie to make it seem more real, and the 3D made you a part of the movie. I really cannot recommend it highly enough – Marvel has got a hit on their hands!